As everyone who plays FFXIV knows, the designers have a rather unfortunate (IMHO) fascination with awarding loot by random drops.  I’ll credit the team for starting to move away from this misfeature by introducing mechanics such as the Primal Ex tokens and the Pages that drop in Savage, but there are still many mechanics in FFXIV that rely on random luck.  This isn’t such a good thing.

[WARNING! MATH AHEAD!  THIS IS YOUR LAST CHANCE TO TURN BACK! It’s easy math though. Honestly.]

I want to talk a little about some of these mechanics and how to think in a mathematical way about questions such as:

Q. We went ten runs last Friday without getting a Pony to drop.  That means our luck was really terrible, right?

Sure, the chance to get a pony on any one run is 10%.  But that doesn’t mean that it’s rare to go ten runs without a pony.  It’s not all that rare.

Here’s how to figure it, using two very basic rules of probability.

This also applies to larger numbers of events, as long as they are all mutually exclusive and all possibilities are covered. If you have four colored marbles in a jar — white, black, blue, and red — and you close your eyes and pick out a marble, the odds that you picked the blue marble are 25%, and the odds that you picked either a white, black, or red marble instead are 75%.  The odds of picking a blue marble and the odds of not picking a blue marble add up to 100%: 25% + 75% = 100%.

Many times when calculating probabilities, it’s easier to find the odds of something not happening, and then subtract that from 100% to find that odds that it will happen. I’ll be using this trick a lot.

So what are the odds of not getting a pony in 10 runs?  It’s (0.9)^10, which is  0.35 (rounded off), or 35%.  Yeah, that’s right — the odds are that when you run 10 pony runs, more than one third of the time, you’ll get zero ponies.  The other 65% of the time you will get one or more ponies, but 35% of the time, there will be no mount drop. (I’m leaving out the possibility of getting Nightmare, which is an independent event; I don’t know what the base chance of Nightmare falling is, especially since he only falls from the first three Primals.) In fact, in order to reduce your Fail Chance to 10%, you need to run 22 Pony runs!  And of course that’s no guarantee of getting at least one pony — it just means that if you run 22 pony runs, your odds of getting at least one pony are 90%.  You need 29 runs to reduce the Complete Fail Chance to 5%, and 40 runs to reduce the Complete Fail Chance to 1%.

Now let’s talk about Pigeons — that is, Lanners, the flying mounts that drop from Heavensward Primal Ex fights.  Supposedly the odds of getting a bird in a single run are 5%, which is to say 1/20 or 0.05. This means the chance to not get a bird is 95%, or 0.95.

This is why I’m not in favor of switching to Pigeon Farming just yet. The odds are good it’ll make for a lot of long frustrating Friday nights without any drops.

I’ve used these calculations in the past to give me a rough idea of how many materia I can expect to blow up before I get one successfully overmelded. Overmelding chance is not dependent on the crafter’s skill or stats; it’s a straight percentage chance based on the level of the materia and how many other materia are already melded to the gear.  Let’s say an overmeld has a 33% chance of succeeding.  If I try with ten materia, what are the odds I will not get the materia affixed before I run out? It’s (0.67)^10, or 2% fail chance — excellent odds.

Of course, having excellent odds doesn’t stop you from getting hit with what poker players call a “bad beat,” like this overmeld attempt I did one day at 33% chance of success: 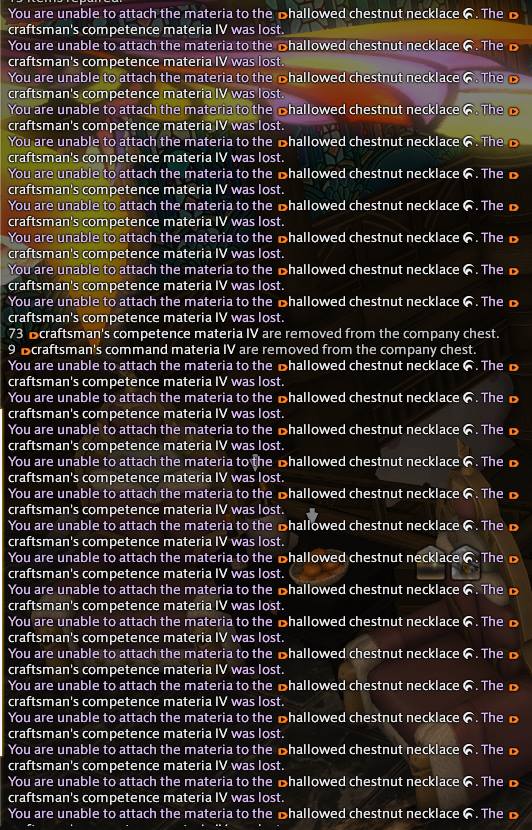 That’s 25 straight failures on a 33% chance of success. The odds of that happening are 0.0045 % according to my spreadsheet. Hooray for random numbers!

This is why I hate random numbers as determiners of success in video game design.  Get enough people trying things when the results are random, and sooner or later some unlucky player will wind up on the extremely short end of the probability stick.  It’s guaranteed (well, probably.)

Now let’s take a look at the Aquapolis!  This is a cool new feature in patch 3.3 wherein some Timeworn Dragonskin Maps open up mini-dungeons.  You enter the first room of the dungeon, fight off some monsters, collect your treasure, and then you have a choice between two doors. One leads to another treasure room, and the other gets you kicked out of the dungeon.  There are seven floors.  What are the odds of getting to the seventh floor from any map?

Now, a quick calculation for gatherers that I did just to appease my own frustration at how rarely I seemed to get a double-proc collectible gathering node.  For those not familiar with this mechanic,  your ability to get a decent number of collectible gathered items from a single timed node is largely dependent on a random mechanic — the free “proc” (activation) of an ability called Discerning Eye.  You have two chances to for this ability to activate, and the chance of it activating is 30% each time.

The chance of getting a proc is 30% or 0.3, which means the chance of not getting a proc is 70% or 0.7   Therefore, the chance of getting a double proc is (0.3) x (0.3), or .09 — which is 9% of the time.  Less than one in ten gathering attempts will give you the coveted double proc. Yeah, that explains why I so rarely seemed to see those — it’s going to happen, on average, only once out of 11 times, if RNGesus is feeling average and not vindictive (see: overmelding, above.)

That’s the end of the lesson! I hope you took good notes, because there will be a quiz next week.