Free Company “Buffs” are enhancements that can be purchased or created by Free Companies to give bonuses to all members of the FC who play while the Buff is active.

To buy our standard Level II Buffs, head over to Limsa Lominsa, go to the Aftcastle aetheryte, and walk to the Maelstrom HQ.

Then speak to this guy: 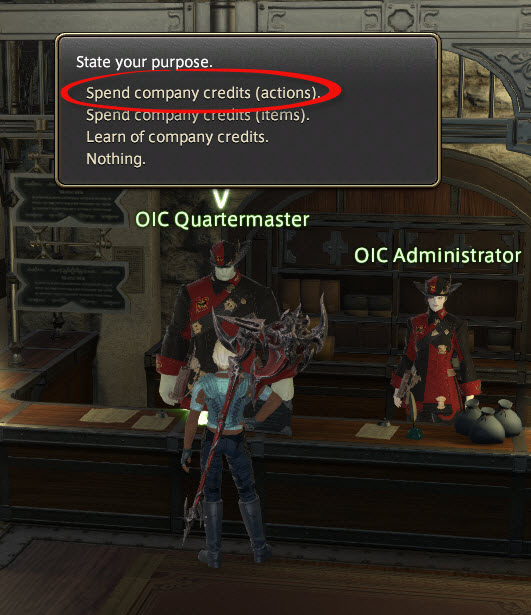 You can activate our FC buffs from this screen if you are already in Limsa buying buffs, but if you are not in Limsa and a buff runs out, you can also activate (but not buy!) buffs from any place in the game by opening your Social menu and choosing Free Company, then Actions to bring up this screen:

Unlike the Level I and II FC Buffs, the Level III buffs can’t be purchased – they have to be made.  Here’s how it’s done.

This is the Aetherial Stand in our FC house basement.  There are several versions of this housing item, with different numbers of different kinds of slots to hold blank aetherial wheels for charging.

This stand has three wheel slots, one each for a level 1, level 2, and level 3 aetherial wheel.  In the picture above, the level 3 aetherial wheel slot is holding a wheel that is charging up. We don’t usually bother with the Level I or Level II wheels, as they produce only level 1 and 2 buffs, which are more easily bought from the Maelstrom than produced here. There is not currently any aetherial stand that will hold two level 3 wheels for charging at the same time, but we’re hoping one day Square will give us one! (No, we can’t have two stands in one FC House. I tried. We also can’t have a stand in our personal rooms. I tried that too.)

In order to use the aetherial stand to make a level III buff, you first need to craft a blank level III aetherial wheel of the correct type.  This can only be done using the Fabrication Station in our FC Workshop.

To make a blank wheel, go to the Fabrication Station in the Workshop and choose:

After loading in all the required materials, you will need to assemble a party of four people, each with a crafter skill. Level 1 in any craft skill is all that’s required to help out with progression; there isn’t any actual crafting required!  The four people don’t even need to be members of our FC to help out, but the entire party needs to be present in the Workshop to progress the craft.  Aetherial  Wheels are a single-phase craft so you only need to progress the craft once to complete it.

If you have any of these items, the Free Company is always happy to receive donations! If you need any of these items in order to craft a blank wheel, please speak to one of the officers who crafts and we will try to help out.

Now that you have your blank aetherial wheel, take it back to the Aetherial Stand and open the aetherial stand menu. 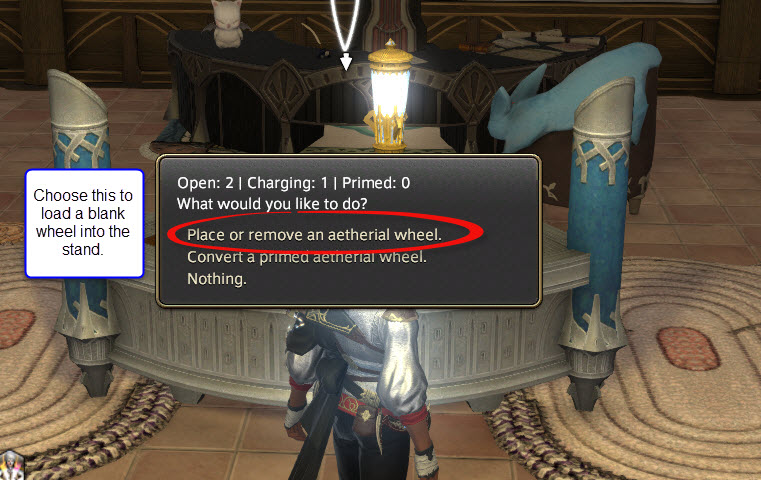 Place the blank aetherial wheel in the Grade 3 slot in the stand.

Leave the wheel in the stand for three days (give or take a couple hours). When the wheel is done charging, it will look like this:

Important Note:  When you remove the primed wheel from the stand, it will bind to you. Primed Wheels cannot be stored in the company chest or traded to another player! You must either convert them immediately, or keep them in your personal storage until you are ready to convert them.  In order to reduce the possibility of a Level III buff being accidentally activated on the wrong day — or worse, discarded! — I usually store the primed wheels on my retainers and activate the two weekend buffs on a Friday.  This also keeps open the stored buff spaces these buffs would otherwise take up. If this system becomes too much of a nuisance, however, we may go back to converting the primed wheels as they are filled.  Officers should be careful to be sure they are not mixing up the level II and level III crafting and gathering buffs when activating as they look very similar! So be careful!

Should you need to convert a filled wheel, here’s how to do it. First, make sure there is an open slot in our available buffs! If we already have 10 buffs stacked up the new one may be lost!

Then, with the primed wheel in your inventory, go to the Aetherial Stand and choose:

The primed wheel will be removed from your inventory and turned into a Level III buff, which will automatically be added to our FC buff list, ready for activation.

And that’s all there is to it!

6 thoughts on “How To: Free Company Buffs & Aetherial Wheels”