Some of you may have noticed recently that Lynx Syntac has been begging for gil for something called “Flame in the Mist.”  Here’s an explanation for the curious of what that is and why we’re doing it.

In FFXIV Free Companies don’t have any automatic income. In some other MMOs there’s a “Guild tax” or “Guild bonus” in which player guilds get income, either as a bonus placed in the Guild coffers when guildmembers earn game currency, or as a small percentage “tax” on game currency earned by players that goes to the Guild coffers.

All the gil the FC has in FFXIV comes from just a few sources.  A lot of ours has come out of the officer’s pockets. But we also get income and goods for our members from our FC gardens and our FC airships.  Our income, however, is limited by the game’s restrictions: we can only have two garden plots for our medium-sized estate, and only four airships per Free Company.

To get around this and increase our FC income flow, several of the officers created alt characters and formed a “sister FC” called Flame in the Mist, which also uses the FC tag “FLAME.” The purpose of this sister FC is to enable the Astral Flames to get a second house with more gardens and airships that we can use for the benefit of the FC.  Until the last month or so we haven’t been able to do much to advance this plan because there hasn’t been any housing available on Gilgamesh. We originally tried to set up F-i-t-M back in December of 2015, before the Great Christmas Eviction event, but all the reclaimed land was bought up within 30 minutes or less, so we were out of luck. Now, however, patch 3.3 brings with it expanded housing for the server, and we have another chance to make Flame in the Mist a reality.

Over the last month the officers of the Astral Flames have been leveling our sister FC, Flame in the Mist, to the FC rank necessary to allow the purchase of land.  We’ve succeeded in getting the rank required, and we plan to try to get a large mansion just as soon as the servers come back up after the patch.  We’re going to be waiting with our characters’ running shoes on to try and dash over and lay claim to the mansion we have our eyes on, which is the one in the prime location marked by the red star on this map:

The large plot costs 50 million gil, which will come out of our FC coffers, supplemented by as much of our officers’ own gil as necessary to bridge the funding gap.  It’s still a big purchase, however, which is why Lynx has been soliciting donations from the rest of the FC to try to defray the costs.

No one is obligated to help us fund this purchase!  Newer players in particular probably don’t have the gil to spare, and that’s fine.  No one should be worried about needing to chip in to continue to make use of all our FC’s member benefits. But we hope this purchase will improve the FC’s financial footing and enable us to keep doing all the things we’ve been doing, and expand our offerings to members for such things as private room giveaways.

Oh yeah, and we’ll have a beach house for beach parties too! 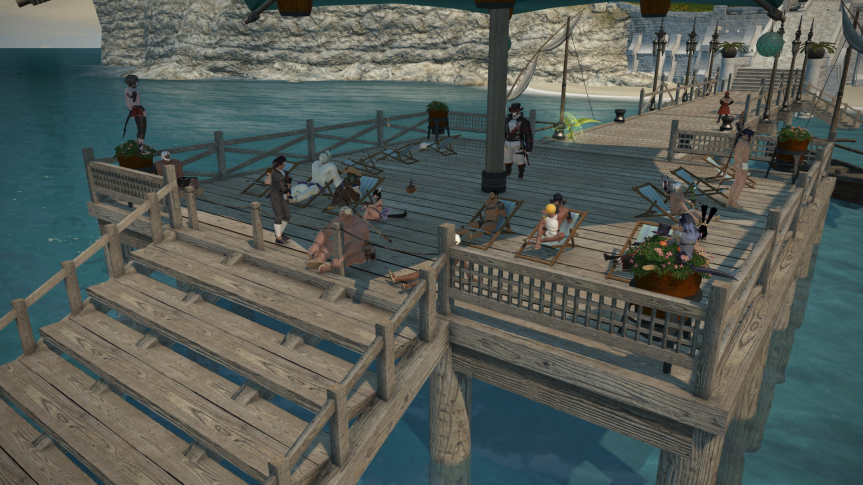